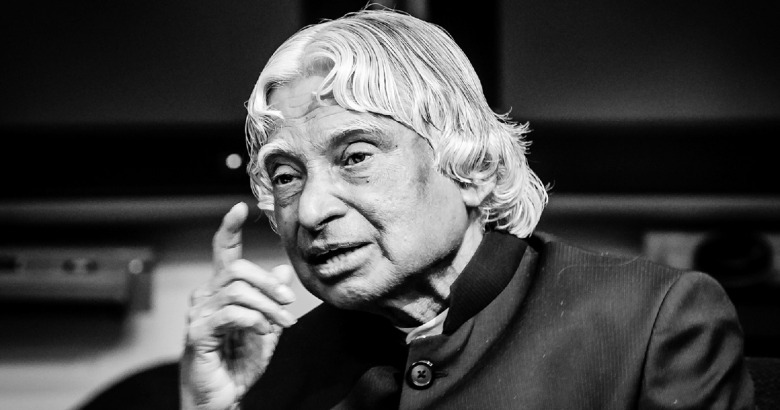 My eyes were fixed on the roaring waves that late evening. I was standing on the land, where my most admired person ever belonged to. The sky was almost dark as the gloomy dark clouds almost enveloped the sky. The waves were high and their roar was easily heard.
The sight wasn’t pleasant, it was scary and chilling. My heart was already beating faster, for my life was hanging on a cliff with uncertainties.
I walked towards my mother to sit beside her, and I could make out from her face that something was wrong and that she was avoiding to tell me.
I kept quiet and did not ask her anything. We got into the car to drive back to the place. Throughout the journey I kept glancing at her, she wouldn’t notice me, which she otherwise does.
We reached the guest house and switched on the TV. I was trying to look okay, since later that evening I had already gulped down a bad news.
The news flashed on the TV screen about death of APJ Abdul Kalam sir. I was numb and shocked. My mother then broke the silence by saying, “I got to know about the news when you were at the beach.”  On asking why she did not tell me about it then, she replied that she did not know how to give me another bad news.
Tears started to roll down, and my hands inked in black color of the smudged kohl. God rained grief all over me that day and I wonder if he is really kind to me.

I was in Chennai and I wanted to go to Rameshwaram ( where Abdul Sir was born and raised in) but life is cruel sometimes, and I couldn’t go. 24 hours round trip was impossible then.

The reality hasn’t sunk in yet; however, his loss is replaceable. He was a benevolent human being who died doing what he wanted to- Delivering a lecture at one of the top engineering institutes in India.
There can never be another APJ Abdul Kalam– People’s President, Missile Man, the man with wings of fire, and the one who read and respected both Hinduism and Islam. 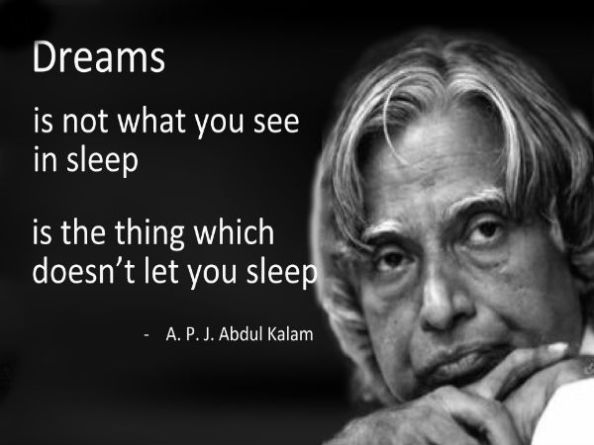 I remember when he was just a distant away from where I was standing during a conference. I was blessed to have a glance of him, to hear his words of wisdom and to be a part of his audience. I still remember each story of his life that inspired countless people.
His words still echo inside my head.

All the love, respect and admiration that I have always carried for him shall stay for eternity.
I pray that his soul rest in peace.

You will be terribly missed, Sir.

This is in response to the Quote Challenge for which I was nominated by these wonderful fellow bloggers; Ashish, Asil, Darshith, HSampson and Akiraa.

This is my favorite quote from APJ Abdul Kalam sir. Sir has been my inspiration throughout and he is not just a leader to me, but a perfect human being I can ever imagine. I have read all of his books and his words of wisdom echo in my head. His journey, his struggles, his success, his accomplishments, his teachings, his undaunted nature moved me. I have all the respect and love for this incredible man.
I always wanted to attend at least one of his lectures. I wanted to hear him live. I wanted to see movements of his hands while explaining (see the picture), while giving a speech and most importantly, I wanted to see that contagious smile. Then one day, I happened to came across a poster on my college notice board about a seminar that was being organised by Delhi University and sir was invited for discussions on commerce. I jumped in excitement and my happiness knew no limit. I registered for the seminar with the money that I had earned organizing a Rio+20 United Nation on Sustainable Development event. Well, yes, that did add to my happiness.
On the day of seminar, after I had done collecting my registration receipt and brochure, I turned back and there he was standing, crowded by university staff. I was only few inches away, but I was so amazed to see him that by the time I could act, he had entered the seminar hall. I am getting all nostalgic remembering it. Yes, he is that favorite.
This is the quote/poetry he narrated on that day and it is on my mind since then.
If you wish to, you can read about him here.

Rules for the challenge:

1. Post 3 of your favourite quotes each per day for 3 recurrent days. The quotes can be of any other people or it may come straight from your own heart.
2. Nominate 3 or more bloggers with each post to challenge them.
3. Don’t forget to utter a thankful word to the person who nominated you.
My Nominations for Day 3
Daniel
Hargun
Steph

In case you have been already nominated by someone, do let me know, I would nominate some other blogger 🙂

Follow From the Soul to the nib of the Pen on WordPress.com